My new equipment assembly is nearly completed.  Recently sold off my Nexstar 8GPS/Hyperstar rig due to physical limitations with my reconstructed shoulder.  I purchased the following to replace it with: 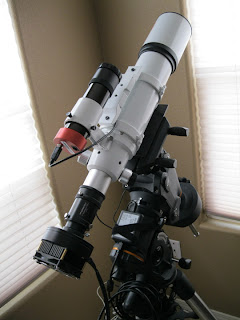 Tested the gear a little over a week ago.  Still awaiting the focal reducer/flattener.  First impressions - with this big CCD chip, there is visible coma in the optics, so I've halted any further imaging until the reducer/flattener arrives this week.  Focuser works great, no obvious chromatic abberation, no focuser flexure.

The CGEM was able to track due south in the sky for hours and capture 10 minute sub-exposures with no adjustments, just an alignment routine.  I made a second outing trying to dial in the balancing, and mount settings.  I found a backlash setting of about 25 in both axis to be adequate.  Any more and the Autoguiding (PHD) software is having to increase its corrections to an unacceptable level, and the mount is jumping far enough to introduce tracking errors into the exposures.  Also had to adjust the PHD calibration step up from the default 750ms to 1000ms which gave near perfect results.  At 1500ms (ideal for shorter focal lengths) was just too long.  The correction commands were all over the place for some reason.  With these settings I pushed 20 and 30 minute exposures for over 9 hours, using both sides of the meridian, and no visible tracking errors introduced in the images.  The largest correction I saw was about .17 pxl, with an average of about .10 pxl, and a correction frequency of about 1 per every 15-20 seconds.  Not bad at all.

The QHY-9 is a very different animal from my prior QHY-8.  It has a mechanical shutter as opposed to none (my heart skipped a few beats the first time I heard the shutter go "thunk!").  Regulated cooling as opposed to on/off @ maximum.  The chip has much more noise in comparison as well.  I didn't have to run darks with the QHY-8.  It's mandatory for me with the QHY-9 on long exposures.  I had to do a lot of indoor tinkering to find optimal gain and offset settings for the camera.  My conclusions were gain 40-50% and an offset of 90.  I keep ending up with some sort of artifact in the image that I don't know quite how to describe just yet, but am still working on diagnosing the cause and a solution to remove it without having to resort to photoshop touch-ups.  It's nowhere near as sensitive as a QHY-8, but it does have it's own benefits such as the improved cooling, and more pixels.  I can shoot my darks from inside with the regulated cooling.  Still tinkering with flat calibration.  Seems about 35,000 ADUs peak is about right.  That equates to 5 second exposures inside pointing at my dining room light fixture using the "white t-shirt" method.

In summary my initial impressions are good.  Dying to get a hold of that flattener/reducer for an all-out run to draw some final conclusions.

First test shot from the gear - Horsehead and Flame nebulas.  A small stack of 300 second sub-exposures, post processed in Photoshop.  Cropped about 25% of the image due to coma, and scaled down to 33% of original size for web purposes. 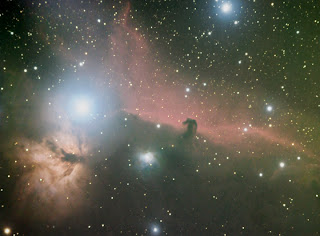