First Light with the Nexstar 5SE

Aurora got her chance for first light with her Nexstar 5SE this evening shortly after sunset, albeit, a very brief one.  There are several new fires burning to supplement the other big fires that have been going for a while now.  While there are no "clouds" per se, the smoke and ash is blotting out the sky each night.  The very orange looking moon broke through for about a half hour and was gone again.  No stars to be found.

Regardless, Aurora sat down and drove her Nexstar from the laptop, controlling alignment, tracking, everything.  Because of the bad conditions she couldn't get a sharp shot natively, so an F/6.3 reducer was put in front of the T3i and t-adapter.  She set the camera for low ISO and full video mode and let it rip in bursts of 1500 frames.  A few neighbors walked by to see the spectacle and ask what the heck we were doing.  They were astounded to see the moon live, and full resolution on the laptop screen.  The clouds rolled in shortly after, and we packed it up. 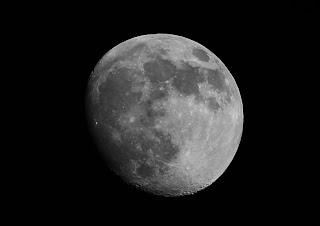 We're still waiting on a clear night to actually set her scope up on the equatorial wedge and properly align it for some more serious work.  Our set of ASI120MM and MC planetary cameras haven't arrived yet either.  And my deep sky gear - well, it's so heavy that I'm not going to even bother dragging it out for a sucker hole in the smoke and clouds.  It may be a while before I see first light with the heavy rig.
Posted by Daemon GPF at 9:11 AM