A fellow CN'er was gracious enough to loan me a Canon T1i DSLR to try out for AP.  Not being all that dissimilar from a CCD - hooking it up, figuring out how to work the camera, focusing, drivers, etc were very straight forward.  I used the T-ring and T-thread adapter to attach it to my Vixen ED80SF and W.O. 0.8x FF/FR threads.  I was up and running within about 10 minutes.  I used Nebulosity 2 for capture.  Set the camera to manual, left it on the default ISO 1600, and tested some exposures to work out appropriate exposure time.  Around 90 seconds was optimal without over saturating.  The amount of detail showing up was superb at first glance.  I let it run on Leo Trio for 64 subs.  I took matching darks amidst the lights.  I captured bias and flats first thing in the morning 30 minutes prior to sunrise and kept them at 25,000 ADU.  I also shot 175 subs of M101.  Everything looked ok up to this point.  This morning I went to run my pre-processing routines - calibrating, stacking, etc.

After the stacking, I ran my usual initial data stretch and while the extended object detail was great, the background is a complete mess.  Looks like a 4 yr old took a red, green, and blue crayon and layed them on their sides and filled in the background with it in swiping motions.  I've never seen this issue in my OSC or Mono CCD astrocams.  For grins, I also tried repeating the pre-processing using Deep Sky Stacker.  EXACT same output.  To diagnose a bit further, I repeated the process in DSS and Nebulosity but subtracting each of the calibration file types one by one.  The problem doesn't seem to exist in the Darks, Flats, Bias.  It's in the light frames.  There is color noise/gradient apparent per each unstacked Light frame, but not consistent with the pattern apparent in the stacked exposures.  None of the calibration files even reduce the effect in any way, shape, or form.  The individual subs are increadibly noisey, as I had anticipated with an uncooled DSLR.  But I had also assumed proper calibration and a large stack of quality light frames would have taken care of the problem.  The extended objects and stars seem very smooth, but the background is horrific.  I'm attaching a crop of the stacked result with a data stretch to help emphasize the effect I'm seeing.  (When you expand the image, there are a few dark streaks, and I am aware that this is oversubtraction from darks not being perfectly matched.  That part I know how to fix.  The rest of the background effect is with no other post processing except a stretch to show it more predominantly.) 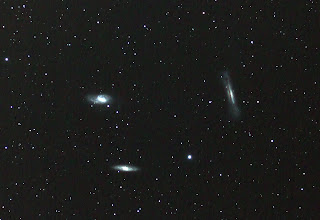 Following up on this issue, here's a crop of the stacked results from using only the latter half of the darks, flats, bias, lights, and a stretch only. 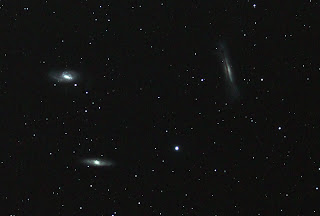 Here's a shot of just the latter half of the light frames stacked with no other calibration files added.  Interestingly enough, the background issue is gone.  Back to analysis on the calibration files I suppose.  Must have been way off on the temp matching.  More to follow. 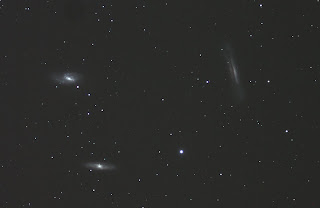 Email ThisBlogThis!Share to TwitterShare to FacebookShare to Pinterest
Labels: First light with DSLR