Before I could even get this camera dialed in appropriate and take some serious shots, it would seem it's now damaged.  I noticed something odd in the last few calibration attempts I made, which became even more apparent in the flats.  Look at the artifact bottom center of this test flat frame: 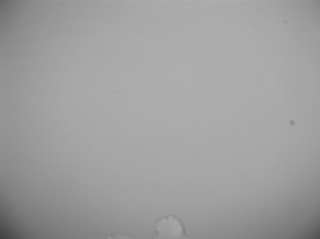 If you fully expand the image you can see it much better.  There's another, more faint artifact next to it.  So I thought this was a hair, or something else that managed to find its way onto the IR window.  Curious since I use my Vixen ED80SF for nothing else but imaging and the QHY-9 is almost constantly attached.  It was showing up in my Light frames and Flats.  So I took the camera off and inspected it closely, expecting to have to clean the glass.  It wasn't on the IR glass, it appeared to be under it.  So I removed the IR window to look closer and found it to be actually on the sensor itself, inside of the CCD chamber.  What it looks like to me is some sort of epoxy or sealant boiled onto the sensor and hardended.  It has the appearance of dried, clear glue.  Getting a picture of this was difficult and it barely shows up with my digicam.  I can see it plain as day though.  Here's a couple attempted images of it.  I outlined the area on the second shot. 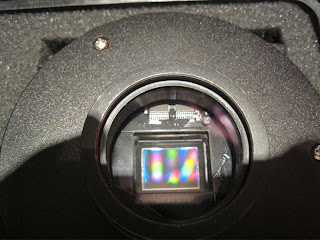 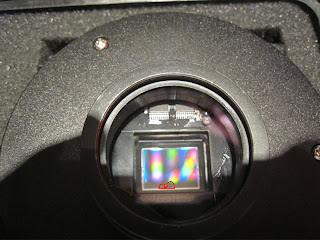 I can't think of any way to remove this without destroying the sensor, not to mention that I'll have to get the chamber purged again if I open the chamber itself.  This camera hasn't been exposed to anything abnormal.  It's stored with my scope in my living room in controlled climate.  It's operated on clean, regulated power at night.  I thought possibly running the CCD for a little bit without the TEC on might generate enough warmth to allow whatever it is to run back off of the sensor.  The attempt was unsuccessful.  Unfortunately, I am the second owner so I don't believe any warranty is implied here.  I'm thinking the chip would have to be extracted and replaced - assuming it's possible on this camera. 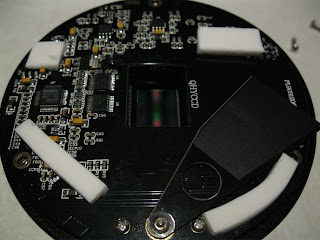 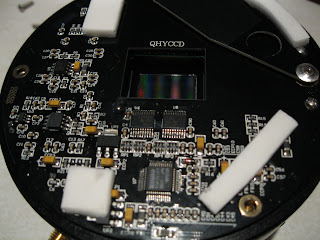 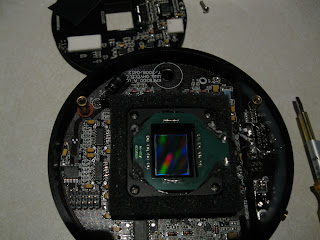 So, for now, I can crop about 10-15% of each frame out and continue to use it as is, or, I need a new camera.  This stinks since I was just ramping up for some Rho Ophiuchi imaging, and as any astrophotographer with experience knows, this area is huge.  It was already going to take me building a 4 panel mosaic to get it all in there with the QHY-9 and Vixen @480mm.  By losing the lower end of my frames, the mosaic tolerances just became more stringent.  I've made a number of imaging attempts since discovering the "smudge" on the chip.  It doesn't seem to be progressing or moving at all, so I suppose I can continue to operate this camera in a stable fashion, it just stinks to buy a big chip CCD like this for the purpose of having that big of a chip, and having to lose more than 10-15% of it.
Posted by Daemon GPF at 9:14 AM

Email ThisBlogThis!Share to TwitterShare to FacebookShare to Pinterest
Labels: QHY-9 is damaged